I will jump through hoops of fire if it will save money.  I will stretch a dollar as far as it will go by using coupons and buying items when they are on sale.  One item I stopped buying is laundry detergent. I started making my own in Oct of 2012.  As I see it, I will never purchase it again.

My mother in law gifted me a jug of her "homemade blend" to try after a recent visit.  I used it and had to admit that I was very impressed.  Curious, I googled 'homemade laundry detergent' and found there to be many recipes and variations to choose from.  I decided on the recipe below as it was the quickest.  Basically the time it takes to boil water. 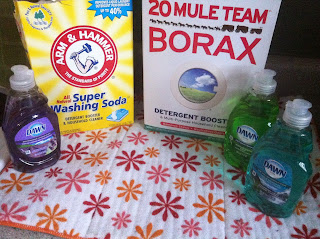 If you need a more powerful detergent you can add 1 TBsp more of each ingredient to the same amount of water.

Place ingredients in heat safe bowl and dissolve borax and washing soda with boiling water.  Add 5 cups of COLD water. Add the Dawn now.  Make sure it cools completely before placing it in the storage container. Don't buy a special container, reuse one from your previous detergent purchase.  Put on the lid and shake. Done.

My mother in laws' recipe was similar except she used about 1/2 of a  Fels Neptha bar instead of the Dawn.  You grate the bar up and melt it in with the other ingredients. It smelled so good, not like a manufactured fragrance.  The smell is just clean.  I usually keep a bar of this handy as it is quite an inexpensive yet highly effective laundry necessity.  The Fels Neptha is quite a steal about $1.50 a bar. This bar has gotten out grass, oil, and blood stains.  I soaked a white cycling jersey in it and the results were fantastic. The stains came out and my dirty, dingy jersey was white again.

This concoction works!  And it smells good.  We are six months in on our supply and I have half of each box left, which leads me to think I will get a solid year out of them. The Borax and Washing Soda run about $4 each.  I buy Dawn at Walgreens when it is on sale for $1.

I met Amy at the Club Fitness in Wentzville, Missouri in late 2012. I overheard someone mention that she had lost 100 pounds!   Now that's a story I wanted to hear.  I introduced myself and found her eager to share and willing to let me write it.  Amy's story is about having the courage to believe in yourself, believe you deserve better, then being brave and going after it. Thank you Amy for sharing your journey with me and allowing me to put it out there.  You are going to inspire so many people.

Amy stands 5 foot 3 inches tall and at her heaviest weighed 224 pounds.  Her clothes were size 18/20.  She emailed me her "before" pictures, I knew the hard work she had to do in order to achieve such a transformation.

As her story unfolded, I sat and nodded my head.  I have heard this story before, I lived it.  Like many women/men, Amy was so busy helping everyone else she could not help herself.  She made other peoples emergencies her own.  She took on their problems which shifted the focus from her own life. Amy stopped putting AMY on her "to do" list.  As a result, she lost herself and in the process became obese, which added to her stresses.  She was miserable and desperately wanted to turn things around. 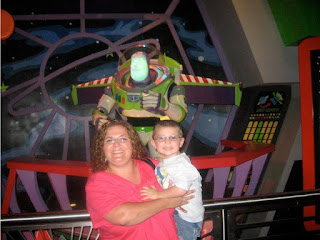 Amy McGhee is the youngest of three, born and raised in Colorado and came to Missouri in 2006 with her husband and young son. She left behind friends and family. Food was comforting and helped her cope.  Food also kept her company late at night while her husband was travelling for business.


Amy admitted she has struggled with her weight and her "relationship with food" her whole life. She could never seem to get a handle on it. She would workout, mostly in-home Dvd's like P90X and Insanity, but was negating the results by eating poorly. Her weight yo-yoed up and down for many years. 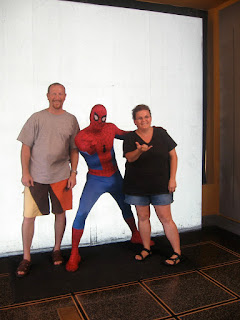 In 2007 she started attending Weight Watchers meetings.  She acknowledged that portion control was a huge issue and she wanted help with it.  Through personal and web based interacton she learned how to control her portions. The scale started to go down.  And then... she got pregnant.  She was mindful of what she ate and her protion size so she did not gain as much weight during her pregnancy.  In April of 2008, her daughter was born.  Amy gave herself  ONE year to get it together and lose the weight.  With a smile, she told me it only took her 10 months to reach her goal. "Goals are dreams with dealines attached".

Amy had to learn how to control her portions and deal with her emotions, instead of feeding them, if she was going to be successful. " Being aware of the benefits that eating healthy and exercise does for my mental and physical well being", is what keeps her motivated.  Amy went from 224 pounds to a healthy 135!  She now wears a size 4/6!  She lost a total of 95 pounds!


In 2012 she started working with a personal trainer and loved the results she was seeing. Time progressed and she found her calling.  Amy recently completed the fitness trainer program at MO college with a 4.0, perfect attendance, and on the president's list.   She is currently looking for the perfect place to use her newly acquired NASM certification.


Amy's Advice
Do it for yourself
Start small and be aware of small victories
Don't focus in the number
Make smart and attainable goals.


Amy does not regret any of the changes she has made in her life.  She was very honest in saying " the hardest thing for me, and still is, my relationship with food.  Some days are easier than others but I still rely on it for comfort.  I will continue to work towards realizing it is to fuel my body not resolve a problem."

Amy is currently signed up to Master the Met and has a goal to beat 7 minutes and 31 seconds for 42 flights of stairs.  She is also thinking of running a half marathon in 2014.  Don't worry, I will be keeping an eye on her and will update you on how she is doing.