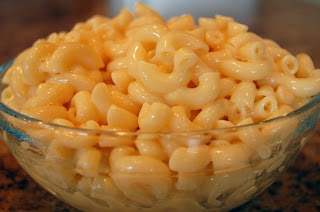 My love affair with this cheese soaked noodles began when I was five.  Picture it, it's 1975 and they have come out with this stuff, noodles and cheese powder, in a box.  With a small amount of butter and milk you had dinner.  I quickly learned this was my comfort food.  I fell in love with it, deep love.  By the time I was 7, I could make it without help.  It was cheap, quick, easy, and delicious.

Mac n' cheese was my friend when no one wanted to play.  Mac n' cheese made me feel better after hearing my parents fight.  Mac n' cheese cheered when up when I had boyfriend troubles, and later in life husband troubles.  I used Mac n' cheese as fuel when I was training for marathons.  It was a double-edged sword, that's how I saw it.

After I hurt my ankle in 1999 and could no longer run, I continued to eat it. I ate copious amounts of it.   That cheesy goodness made my life so much better. Everthign was so much better with a mac n cheese buzz. It was definitely my comfort food.  I was happy when I ate it, giddy with delight,  not so much afterwards.  I felt guilty, fat and weak. Those small boxes of cheesy noodles put on the pounds very quickly, especially if you are a couch potato. After putting on 50, 60, 70 pounds whats the point right?  I kept shoveling it in.  What was it about this dish that I found so appealing? At times it felt like a drug, I couldn't get enough.  Spoonful after spoonful, I lost myself in mac n cheese.

Looking at it now, it's rather disgusting.  One of the most processed foods on the shelves these days is macaroni and cheese. To be fair... I don't think it was as processed back in the 70's.  Kraft has been under fire lately for using certain dyes, that are banned in Europe and China, that apparently cause terrible side effects in children, everything from allergies, asmatha, migraines, and even cancer.  Are you kidding me???  This is horrible.  Are you telling me that a simple box of macaroni noodles and cheesy sauce or powder can hurt my kids?  Unfortunate, but true.  I encourage you to do your own research and make your own decisions.

It's a very rare occassion that I will eat mac n cheese these days.  It may surprise you but it's NOT just because of the ingredients.... I can make it from scratch..... Mac n cheese makes me sad, it reminds me of my semi-miserable childhood, my bout with depression, and the fact that I had zero control around it. I choose not to eat it for those reasons.  I no longer have an anchor of cheesy noodles to drag me down.  And, you know what???  I don't miss it, not one bit.

Posted by Wendy Davis at 6:37 AM No comments: